There are two main tools I like to use for any memory related stuff in my c++ code. Following is an example code I had written as my implementation of a shared pointer. I think my code works as expected but not sure how much memory I am leaking if any.

The explanation: The address sanitizer has precisely pointed out the line numbers. It is very useful in coming up with a fix.

The output by valgrind shows entire picture of virtual memory and how source files and code is laid out in the memory. It detects the loss of 32 bytes of heap memory still in use at the exit.

The output shown by the google address sanitizer was useful at micro-level. It precisely pointed the line number and I was able to apply my first fix to the memory leak in virtual destructor as follows:

I still have following leaks:

Going through the code I fixed my copy assignment operator by deleting the resource pointer and the counter pointer as follows:

Because the CPU and/or the compiler can reorder the instructions written in program order. Modern processors and Compilers try to optimize the program by reordering the instructions all the time. But the observed effects (on load and stores on memory locations) are consistent.

is defined as the result of any execution is the same as if the read and write operations by all processes were executed in some sequential order and the operations of each individual process appear in this sequence in the order specified by its program [Lamport, 1979].
which means:

Sequential consistency is very important especially in multi-threaded programs because when a thread changes the shared variable, the other threads should see the variable in a consistent and valid state.

Modern processors have a buffer where they store the updates to the memory location  called as store buffer. The reason, updates do not go to main memory directly is writes to main memory are very slow and value from store buffer can be reused because of spatial locality.

Lock Based implementation of a Multi-producer, Multi-consumer Queue.

In the above implementation, the data structure is a lock based one and hence no two threads can access is concurrently.

I always got fascinated by heap memory. Questions such as

How heap memory is obtained from kernel?
How efficiently memory is managed?
Is it managed by kernel or by library or by application itself?
Can heap memory be exploited?

were in my mind for quite some time. But only recently I got time to understand about it. So here I would like to share my fascination turned knowledge!! Out there in the wild, many memory allocators are available:

Since Linux 2.0 support Symmetric Multiprocessing with multicore modern microprocessors. But with this new dimension of problems arose like race conditions, dead/live locks etc. In order to mitigate these issues, various synchronization mechanisms were introduced in Linux. The 2.6 version of Linux supported full preemption, that means scheduler can preempt kernel code at virtually any point and reschedule another task.

Since all threads run in the same address space, they all have access to the same data and variables. If two threads simultaneously attempt to update a global counter variable, it is possible for their operations to interleave in such way that the global state is not correctly modified. Although such a case may only arise only one time out of thousands, a concurrent program needs to coordinate the activities of multiple threads using something more reliable that just depending on the fact that such interference is rare.

Semaphores vs. mutexes (from wikipedia)
A mutex is essentially the same thing as a binary semaphore and sometimes uses the same basic implementation. The differences between them are in how they are used. While a binary semaphore may be used as a mutex, a mutex is a more specific use-case, in that only the thread that locked the mutex is supposed to unlock it. This constraint makes it possible to implement some additional features in mutexes:

Semaphore is one of the thread synchronization mechanisms. Unlike mutex, semaphore allows more than one thread to access similar shared resources at the same time. There are two types of semaphores

Pipes are used for communicating data between the processes. Output of a process is piped as an input to another process.

FIFOs are named pipes. FIFOs can be used as follows:

once the FIFOs are made, they can be opened using open command and the normal file I/O functions (e.g., close, read, write, unlink) all work with FIFOs.

Processes are created on linux using fork() system call. When fork() is called, a process is created which is child of process who is called fork(). The reason it’s called as a child because it gets copy of resources (data, variables, code, pages, sockets etc) from it’s parent process.

Processes are identified by PID. PID is a defined by pid_t data structure which is an integer up to 32,768. Generally processes up to number 1024 is kernel processes and rest of them are user processes. When a new process is forked, the number is not sequential but its randomized in order to avoid being guesses. When number is processes reaches max limit, the number is reseted and starts from 1024. The limit of number of processes can be increased by setting value at proc/sys/kernel/pid_max.

Process 0 is ancestor of all processes which is also known as swapper process. This process is build from scratch during boot up. Process 0 initializes all the data structures needed by kernel, enables interrupts, and creates init process which is process 1.init process, invoked by the kernel at the end of the bootstrap procedure. It is responsible for bringing up the system after the kernel has been bootstrapped. init usually reads the system-dependent initialization files (/etc/rc* files or /etc/inittab and the files in /etc/init.d) and brings the system to a certain state. Process 1 never dies. It is a normal user process, not a system process within the kernel, but runs with superuser privileges.

State of a Process

Process can be any one of following states:

Copy on Write – an optimization on fork()

All the data and resources that belong to the parent are not copied to child. This is done is steps and as needed. This is an optimization in order to delay copying data as needed. The another reason is in calls such as exec(), none of the parent data is actually needed, there should not be a need to copy any pages from parent.

Processes work on time slicing basis giving user the illusion that only the user has access to the CPU and the memory is unlimited. The scheduling of processes depend upon scheduling policy or algorithm. The scheduling algorithm must schedule in such a way that processes should have fast response, good throughput, limited use of resources and honor the priorities.

Scheduling factors for a process

The Linux kernel (since 2.6), unlike most other Unix variants and many other operating systems, is a fully preemptive kernel. It is possible to preempt a task at any point, so long as the kernel is in a state in which it is safe to reschedule.

Linux threads are light weight processes i.e. Linux does not make any difference between threads and processes. They share resources with parent like heap space, file descriptors, sockets  but each thread gets own stack.

Address Space of a Process

Since linux uses proc file system to represent processes, listing all the processes can be done using ls /proc/

syscalls are implemented in Kernel and can be called from a process running in user space with appropriate privileges. There are around 330 number of system calls in Linux. The Linux API is written in c.

Process termination can be normal (finishing intended code execution) or can be abnormal. The Abnormal execution is because of following reasons:

On process exit Kernel releases the memory and other resources held by the process like file descriptors.

Examples of the profiles 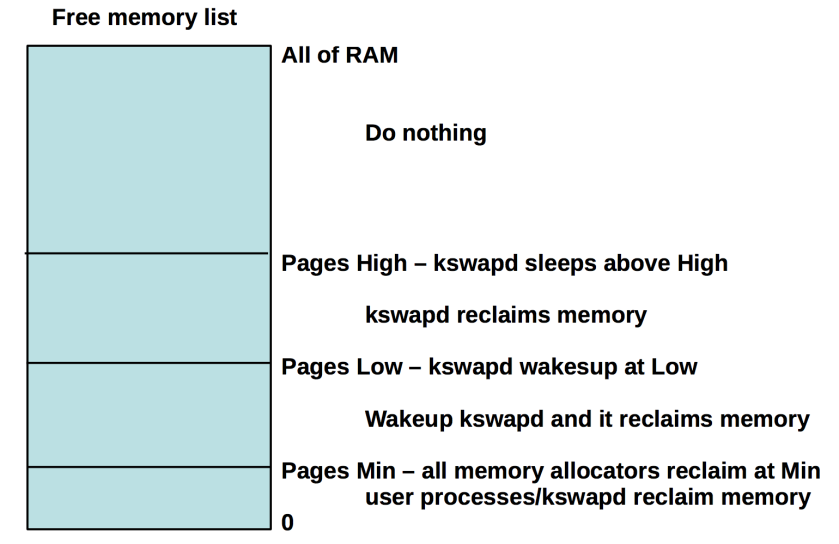 Optimization include Benchmarking, Profiling and Tracing

Based on the Benchmarking, Profiling and Tracking the system is tuned as follows;

For x86 Architecture there are 3 types of addresses: 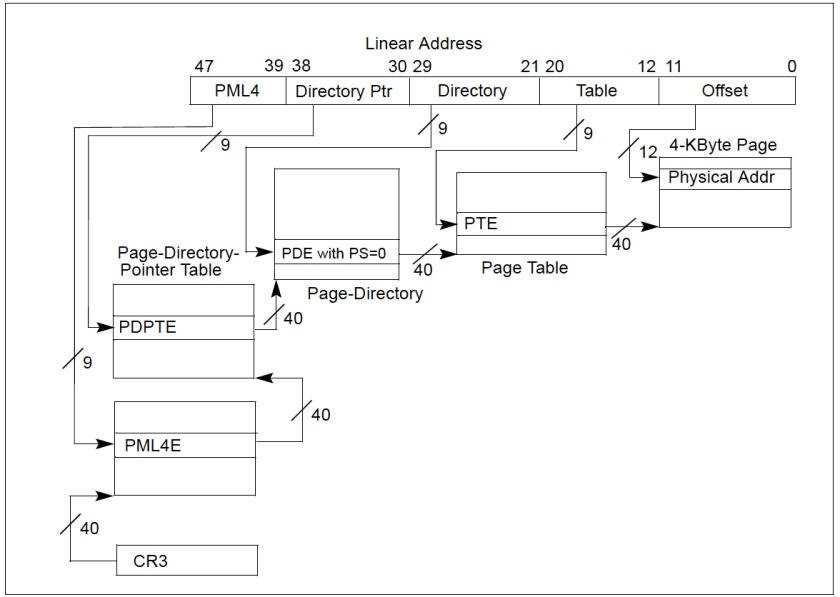 Formats of CR3 and Paging-Structure Entries with PAE Paging

Segmentation and Paging in Linux

Segments and their usage 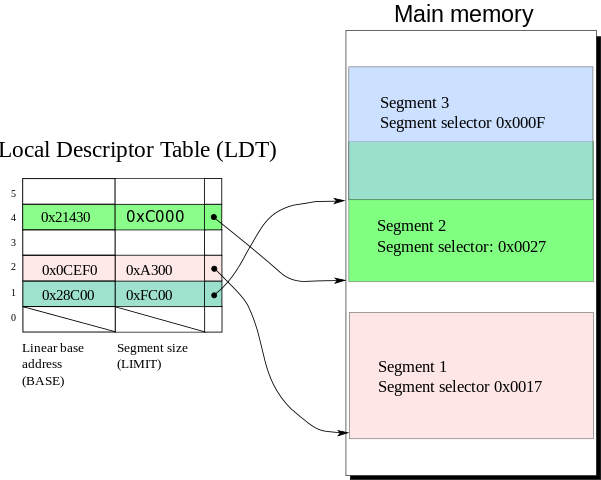 What is Virtual Memory?

It allows us to run more applications on the system than we have enough physical memory to support. Virtual memory is simulated memory that is written to a file on the hard drive. 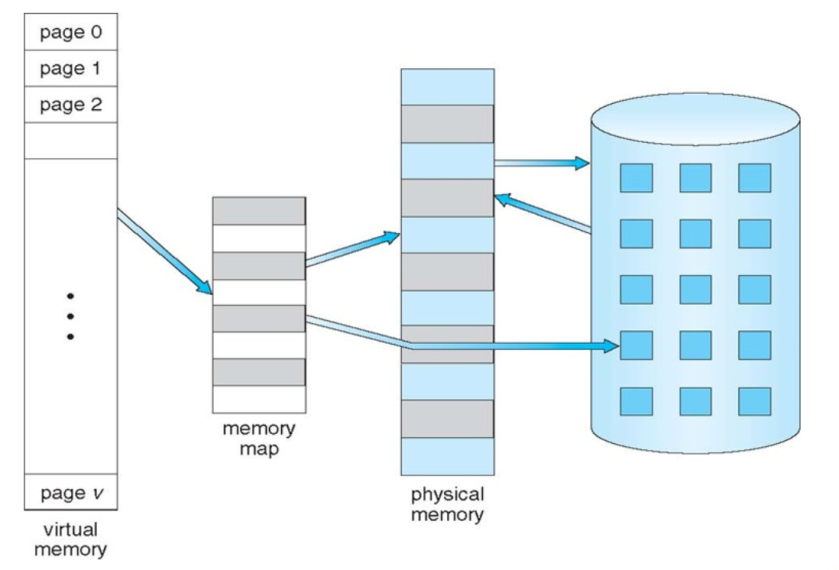 Virtual Memory is implemented with

Zones are defined using data structure struct zone, which is defined in <linux/mmzone.h>. On X86 the physical memory is divided in zones as follows

Each zone has a zone descriptor with following fields: 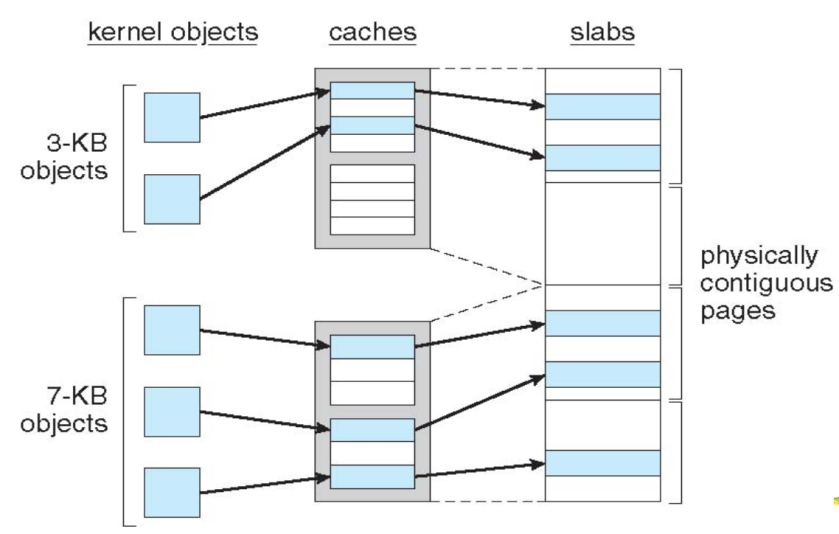 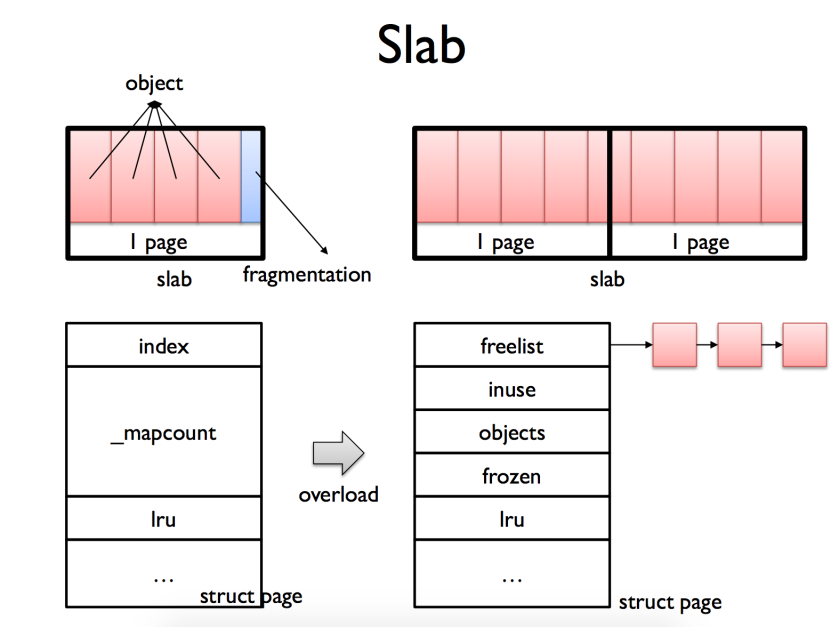 Software Programs are generally very large in size and can not fit entirely in main memory. Hence only part of the pages are brought in main memory from disk when absolutely required.

Implementation of the LRU aalgorithm

What is an Interrupt

Interrupt is an event that changes the program flow i.e. the instruction stream being executed by the CPU. Interrupts are also generated by various devices connected to the CPU or they caused by bugs within the software. Interrupts are way for hardware to signal to the processor.

_Page Fault occurs when the process try to address a page in its address space but is not currently in RAM. When Kernel is handling this exception, it may suspend current process and switch to another process until the page is available in the RAM. The process switch is done because of high latency of RAM (200 ns or serveral hundred CPU cycles). _ 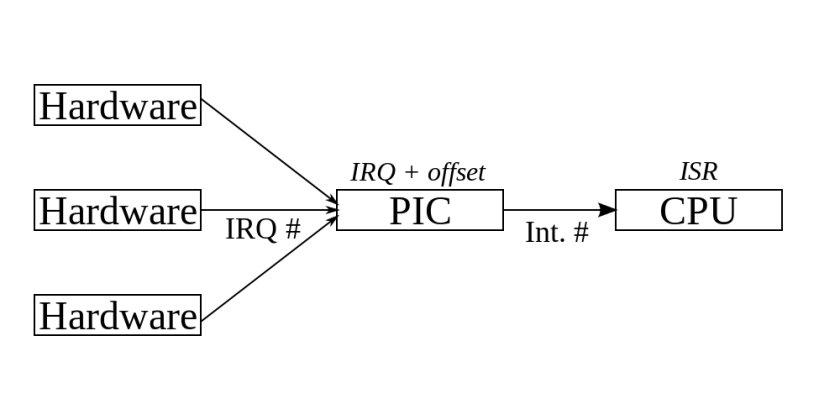 In modern multiprocessor systems, there is a local APIC chip per CPU. The APIC has following components: 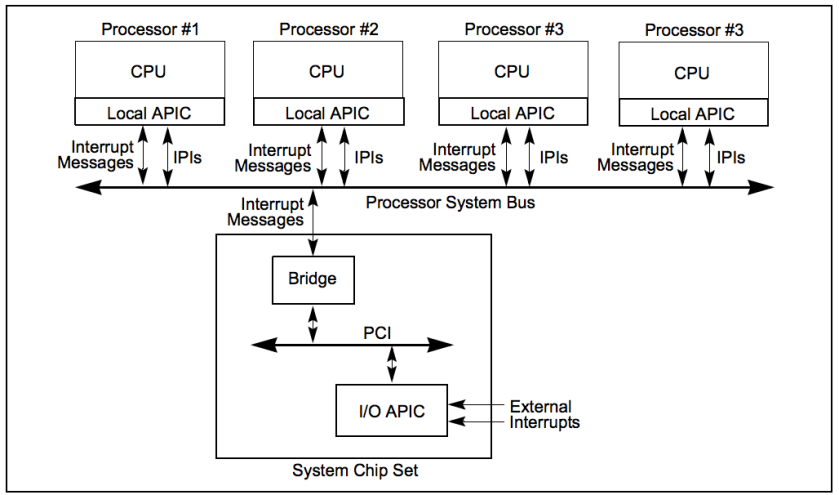 Types of Actions taken by Linux on interrupts

The kernel tries to distribute the IRQ signals coming from the hardware devices in a round-robin fashion among all the CPUs.

The kernel provides a functionality to redirect all the interrupts to a particular CPU. This is achieved by modifying Interrupt Redirection Table entries of the I/O APIC. IRQ affinity of particular interrupts can also be changed by writing a new CPU bitmap mask into the /proc/irq/n/smp_affinity file.

When an interrupt is received, kernel runs inyerrupt handler or interrupt service routine code. These are ‘C’ functions. A data structure named Interrupt Descriptor Table (IDT) stores each interrupt or exception vector with the address of the corresponding interrupt or exception handler. That Table must be properly initialized before the kernel enables interrupts.

When a process receives a signal, it can do either of following.

Reentrant functions: functions that are guaranteed to be safe to call from within a signal handler. These functions are async-safe functions meaning they block the signals before entering into a critical region